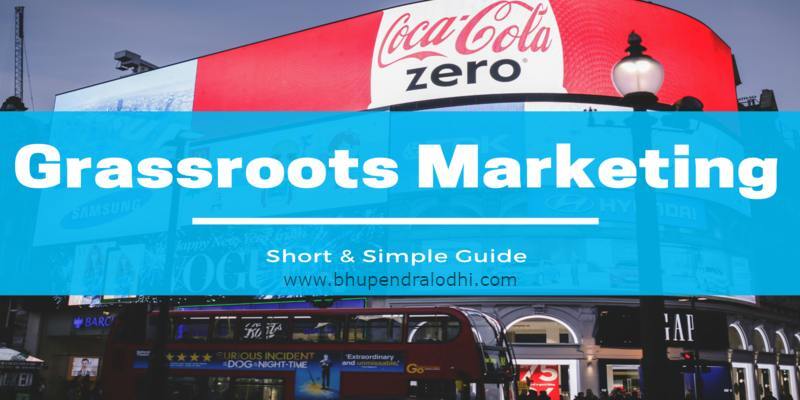 WHAT IS GRASSROOTS MARKETING?

HOW TO START YOUR GRASSROOTS MARKETING CAMPAIGN?

You can obviously refer to some marketing professionals for tips or go through the case studies of some famous brands who built their reputation through the strategy of grassroots marketing to get an insight into how to proceed with it.

Here are some of the steps that can help you out in the promotion of your brand via grassroots marketing. These are as follows;

For starting any Market campaign you must have an idea of who you are actually targeting? And as discussed above grassroots marketing is all about spreading a message among the target audience thus this makes it Mandatory for you to know your target audience. Figure out the likes and dislikes of your target audience and what they want and produce your content accordingly to drive customers into your business.

Creative thinking is one of the skills required in order to have a successful grassroots marketing campaign. Add all sorts of emotions to your campaign, be it comedy, tears, happiness anything. Since these emotions straight away strike people’s hearts. Plan out something that moves them or inspires them. Therefore try to be creative and create content they can resonate with.

For all those who thought grassroots marketing is similar to viral marketing and will require something that goes viral than a big, big no! Yes, you must create content that will go viral but it is more about word of mouth and sheer shareability in order to gain wider attention to your propaganda. So starting hyperlocal is something to consider.

Now it is a well-known fact that YouTube is the best channel if you want to go for promotions. Thus, it is an amazing platform for your grassroots marketing content. You can easily share your content with the targeted audience and also reach out to a wider audience more organically. But one must remember that YouTube content gets shared only when they are effective. Thus, make effective contents that are both inspirational and educational.

People are often adamant when it comes to reviews but trust me, reviews while promoting a brand or product is quite important because they help you know what people really expect from you. You get to know your faults, failures, and at the same time people’s choices and wants. Thus, always have an appreciation for people’s positive and negative feedback and use them to your advantage.

Here are some of the examples of companies along with their website link given below, (you can become a member of these or know further about them by checking out their websites) and the amazing results they got through grassroots marketing campaigns.

About: a Canadian carrier that provides low-cost charter services.

Results: West jet asked the passengers what they wanted as a Christmas gift and while some passengers were airborne, they raced to purchase the desired items and gifted them to those travelers who became very happy. This video got viral on YouTube and received more than 44 million views on YouTube. Thus West jet used a stunt-based social media campaign to create a name for their brand and to outshine their goodwill and services.

About: founded in 1958 this association supports the pet product industry and also promotes pet ownership.

Campaign goal: to increase the ownership and adoption of the pets

Results: the American pet product association targeted the audience by creating a funny video of the pet talk show where the pets could talk. They also used celebrities like Lauren Conrad and Alison Sweeney for promotions. The video released on YouTube received more than 3 million views and after engaging the celebrities in the promotion process it also got 7,245 clicks on Twitter. Thus, they used fun emotion and creatively targeted the audience.

About: Oregon dentists can voluntarily be a part of this organization. The Oregon dental association provides continuing education, advocacy, and other help to the dentist in order to promote good dental health.

Results: since teaching the importance of brushing every day can be a waste of effort if taught in a serious manner hence the Oregon dental association thought to do it in a more hilarious manner. They released a youtube video named” teach me how to brushy” where renowned celebrities and decent people were dancing while brushing. The video crossed more than 800,000+ views and the advertisement has also been published on many other digital and non-digital platforms.

About: UNICEF Sweden works for providing long-term humanitarian aid to children and women in developing countries.

Campaign goal: it released a campaign on the global obsession of Facebook likes and also promoted the slogan “likes don’t save lives”

Results: UNICEF wanted to emphasize the fact that likes on their post are not doing any good to people rather they must also try to donate some amount for social benefit. They signified the importance of social media being an excellent platform for social awareness but if people extended their support more than just liking the post. Targeting this mindset they released four YouTube videos that crossed 750,000 views in 195 countries and more than 10,500 tweets and as a result, a sufficient amount of money was received as a donation to vaccinate 637,324 children against polio.

About: aiming to give a secure, decent and affordable place to live, habitat for humanity is a nonprofit organization that works for this cause.

Campaign goal: the goal of habitat for humanity was to create awareness among the youth who wants to create an impact about who they were and who does the organization work for.

Results: habitat for humanity released a motion video comprising of an animated character named Theo and named the video “use your voice”. It then became the most viewed habit for humanity video of 2014 and was dubbed into various languages including Korean, Spanish, and Portuguese language. Many other websites started adding their own website links at the end to navigate the audience to their own websites.

The Grassroots market has been a beneficial way for many big companies to create their dominance over the market but it is important to know that why only grassroots campaigns?

There are ample marketing strategies that can help you climb the ladder of success. Then why adopt grassroots? To answer these questions it is important to look at the advantages of grassroots marketing.

Some of the advantages of grassroots marketing are given below;

a huge advantage of grassroots marketing is its low cost as it uses mostly social media campaigns and marketing ways like FACEBOOK MARKETING, INSTAGRAM MARKETING, etc. Which automatically lowers down your cost as they are all free! What other thing do you admire when your information is spreading like wildfire and that too free of cost.

If you look carefully at your surroundings you must notice that some campaigns feel more real and genuine. They automatically create an impact and trigger your emotional aspect. Grassroots marketing if done carefully and correctly can feel more authentic and deep to the audience. It is likely that your message and propaganda will spread more if it touches people’s hearts.

Billboards and advertising are so important when it comes to reaching the targeted audience. They help you to have a spread word of mouth and at the same time provide you with brand recognition.

Grassroots marketing can work wonders if the company knows its right target audience and uses the right techniques to influence them to and promote the brand. It also requires a creative mindset that can trigger people’s minds and at the same time don’t actually pressurize the customers to buy your product.

In all the examples we discussed above of the companies who have actually gained recognition and reputation through grassroots marketing campaigns there is a common factor that almost all of them have mostly used YouTube platforms for grassroots marketing campaigns. This is a part of content marketing and YouTube platforms undoubtedly provide you with a free source to sell your product creatively and to quickly reach a large audience.

Grassroots marketing can be a cost-effective strategy in the market business and it can be made more genuine and real so that it organically appeals to people. Thus, it must be a campaign that is not hammering people’s minds to buy your product rather than using intriguing techniques that actually makes them want to buy your product.

Thus, we might conclude that if done correctly and creatively a grassroots marketing campaign can be an amazing way to uplift your business and promote your product among the audience.

How many international tweets were there during the UNICEF Sweden campaign named “likes don’t save lives”?

There were 10,500 tweets out of which 8000 were international tweets during the campaign.

Name some platforms where the Oregon dental association’s featured video has been published?

The Oregon dental association’s video called” teach me how to brushy” has been featured on Google morning America, the today show, Huffington Post, and several online publications as well.

What is the Full form of APPA?

Which award did WestJet get for its YouTube video?

Name some drawbacks of grassroots marketing

Some of the drawbacks of grassroots marketing are listed below;
● Expensive production cost
● It’s of no use if it’s not done on a significant scale