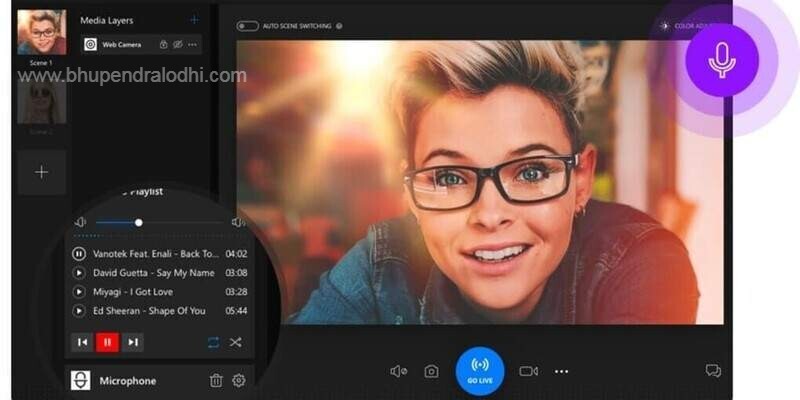 Have you ever thought about streaming your games to the internet? Maybe you’ve just heard about twitch and want to make a few extra bucks every week for yourself. All of these avenues open up once you learn how to use streaming software.

Even though most platforms such as twitch and youtube allow you to directly stream, it is a better idea to use streaming software that can synchronize and arrange your stream. You can monitor your audio levels, your different cameras, apply some greenscreen effects and even configure points in the steam where the screen is blurred to protect your private data.

While in theory, you can use the native streaming tools for the platform, using streaming software can really boost your stream quality with a few simple steps.

The streaming software that you use might depend on the platform you want to use. The most popular choice is OBS and the good news is that it works on all platforms. You can even record your streams and share them as clips online.

Why use streaming software?

It’s simple when you use streaming software not only do you have complete control over how your stream looks, you can also record these streams in high quality on your computer which allows you to broadcast them again if needed which is a very handy feature.

Most streaming apps also have smaller communities around them where you can go and publicize your stream. It might not help you pull in millions of new viewers to your stream but it will surely help you get off the ground and allow you to be a small streamer.

The most important reason of all is to make your streams look more professional, the steam is your way of connecting to more people, and being able to control it better is an option you want to keep handy.

How to use streaming tools to generate revenue?

Streaming can act as a secondary income for you. Your main job can allow you to buy a cool gaming pc and the revenue from streaming can help ensure that your gaming skills aren’t put in the trash.

For many streamers, this has been the case, they worked in the morning and streamed all night. This was stressful for them at the beginning but eventually became one of their main sources of income.

You can do this too, anyone who can be fun when playing games or just play a game well can become a streamer. In fact, streaming is now popular amongst both gaming and non-gaming viewing audiences.

You can capitalize on the non-gaming audience as well. There are a lot of streamers out there who stream non-gaming content exclusively as well. In today’s internet trend you can make a living off of streaming anything, even streaming mundane and boring tasks such as studying can attract a massive number of viewers and the best part is that the streaming market is still new.

With a bit of effort you can come up with new content very easily, and as time goes by making it as a streamer will obviously get more and more difficult which is why you should use streaming software to help make your stream stand out.

The most common way to monetize streams is to allow different levels of control over your stream based on the donation received from them. For example, you could shout out viewers’ names who donate more than 5$ and viewers who donate over 10$ can choose which weapon you use in the next game and so on and so forth.

Such a model of payment makes the donation less like a donation and more like a one-time fee to get partial control of the stream.

This type of payment system might sound a bit odd to those who have come here from a traditional business background but there is nothing new here. This format of payment has existed for over decades now and streamers can make 6 figure revenues as well. One such example is Ninja.

Ninja over the past few years has built up a huge reputation, he is now one of the richest streamers. All Ninja had to do was diligently stream the game he was good at and enjoyed playing.

Another less popular method is to hide your stream behind a paywall. The viewers can access the stream only if they’ve paid for the stream. These are usually referred to as member-only streams. Since most of the time, these streams are meant for paying members of the creators club which acts as an incentive to join their club.

Now that you understand the streaming industry a bit, let’s look at some of the top selections in streaming software. These names have been picked for different kinds of users, all of them have different target demographics and have different ways of interacting with your stream so read carefully before purchasing anything.

As usual, OBS studio ranks number one on our list. OBS studio is pretty much industry standard at this point, most professional gamers use this software and the userbase for this streaming software is skyrocketing as more users are joining this space.

OBS has a few distinct advantages over their competitors such as having an unparalleled level of community support, you can get any doubt of yours solved with the help of the community.

You can even use OBS to add some greenscreen effects before streaming it live to the main screen.

You can add audio effects using external hardware and even use custom sounds. This helps liven up the mood even more. This does happen to be one of the most popular effects in OBS since the audience always seems to be obsessed with memes and this is a cool way to reference them.

Learning OBS can really help your stream. You can add multiple filters and effects to your cameras and your screens which allow for an insane level of customization but all of these effects are computer-intensive and you need a good computer that can handle this workload.

Another nifty feature that OBS has is saving streams. This feature allows you to not only save live streams but also make your setup such that you can make videos on the go with the press of a single button. These kinds of setups really help the creator to experiment with their content instead of having to spend that money on hiring cameramen and video editors.

OBS also has an inbuilt audio mixer that can get most of the work done but you do have the option of using an external audio mixer as well.

One of the main problems with OBS is collaborative streams, which becomes almost impossible to do inside OBS.

Coming down to number two on our list, we have StreamYard, which is one of the most popular online streaming tools. This tool has been used by many popular celebrities and streamers.

With support for Facebook live, Youtube live, and twitch this is one of the most popular streaming tools and it’s easy to see why the UI is nice and colorful, and very beginner-friendly.

StreamYard also allows you to bring up to 10 guests per session. You can make the video interactive by showing the top chat comments on the screen and interacting with them.

You can also use green screens to integrate your background with the motive of the stream.

In a world where being quick to a trend is very important, especially so in streaming, an online tool can help you stay ahead of the curve. No setup is required, you don’t need to know how to use any software and the best part of it is that you don’t need to worry about your drivers at all. With some other streaming software, you might need to reinstall audio and video drivers to get the streaming software working, you won’t have to worry about any of that with an online tool.

The online streaming software can easily detect your microphone, webcam and record your screen, all from within the browser. StreamYard was made for people who do not want to get too involved with the technical side of streaming.

Although one downside to StreamYard is that you cannot stream to all the platforms, it covers most of the major platforms like Facebook, Youtube, and Twitch but it does not support smaller streaming services.

Even though StreamYard offers a great level of customization, most of the customizations are limited to paid users which means, you’ll have to pay the premium even before you start earning.

All of these issues are small issues and can be ignored by beginners or people who just want to dip their legs without having to make a commitment. This streaming tool is perfect for those willing to trade off some features for the ease of using streaming software in your browser.

So far we’ve only talked about free software but, now it’s time to look at some paid software. Most of the other paid streaming software choices are simply not value for money, they take a fee from you on a monthly basis which means that they keep on taking a percentage of your income every year which is pretty bad for a streamer who is starting out.

Instead, you can use vMix, this streaming software is a bit old but works well nonetheless, and the best part about it is that it has a single time upfront purchase fee which is much better than other streaming software that takes up some money every month.

Complete with visual overlays and effects, vMix seems to be the choice for anyone making a career out of streaming. With high-quality 4K resolution and instant replay as well you can capture every moment live. vMix can even queue content from social media and add animated subtitles to them and best of all you can even add VSTs to add extended functionality.

vMix is one of the only streaming tools that can brag full support for SRT (Secure Reliable Transport).

Just like StreamYard, you can opt to use vMix in the browser as well, even though the browser version misses some features, it can compete with other streaming tools.

One of the bigger problems is that it is available for windows only.

Side by side comparison

From the table above it’s clear that OBS is the best in case, you do not need to bring more people onto the stream, in case you need to add more people on steam then I’d suggest StreamYard.

How many sources can I have in OBS?

Infinite, you might have to distribute your sources across different scenes.

How can I invite guests to use OBS?

The most common way is to use video conferencing software that you use as a source and stream.

Does streaming affect my gameplay?

Yes, streaming is a computer-intensive task hence it takes up most of your computer’s resources and slows your computer down.

Can I stream to multiple platforms at once?

Yes, you can stream on multiple platforms at once, most streaming software and tools support this.

How do I know if I’m loud enough on my stream?

You can either ask the audience or open up your audio mixer to check your mic volume and adjust it.