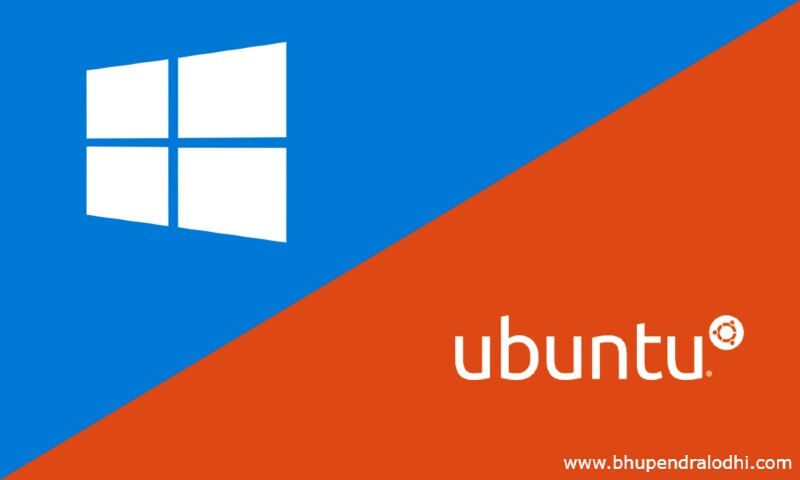 Ubuntu vs Windows is one of the hot topics in recent times. Today we are going to elucidate the features, functionality, pros, and cons of these operating systems before you and compare them head-to-head. Which is better?

Ubuntu vs Windows Which is better?

Ubuntu and Windows are some of the most famous operating systems on which most of our computer systems depend upon for their functioning.

Today we are going to elucidate the features, functionality, the pros, and cons of these operating systems before you and compare them head-to-head on the basis of the above-mentioned points, i.e., Ubuntu vs Windows. Which is better?

Ubuntu and Windows like other operating systems are programmed to manage your computer hardware, software sources and provide common services for computer programs.

Windows has come out to be one of the most popular and desired and famous operating systems. It was developed in the year 1985 and was named Microsoft Windows. But it was commonly called Windows. It has undergone a lot of changes and updates all over the years, improving version by version.

All the updates and new versions of windows have gradually improved the interface with new features, and now it is compatible with almost all of the famous software in every field of career and computing.

The latest version launched by Microsoft Windows is Windows 11. Other famous versions of windows are as follows- Windows Vista, Windows 7, Windows 8, Windows 8.1, Windows 10, and many more.

Some of the salient features of the Windows Operating System are:

Ubuntu is a modern, open-source operating system software. It belongs to the Linux family. It was developed by Canonical Ltd. Ubuntu is officially released in three editions – desktop, server, and core (for the internet of things and robots).

All of the editions of Ubuntu can be run on the computer alone and on a virtual machine. It is mostly used for enterprise servers, desktops, the cloud, and IoT.

All of the versions have been gradually improving and have been providing a quality tech interface to its users.

ALSO READ: How to create a payment gateway and get paid

Head On Comparison Ubuntu vs Windows

Now, here we are going to compare the above-mentioned operating systems on the basis of the following aspects.

If we talk about the pricing aspect of both the operating software, Ubuntu has a slight edge over the Windows operating systems.

Windows is a paid software and users are required to pay for every version that users need to upgrade. Windows 10, which is one of the most famous versions of Microsoft Windows costs about $119.99 for home and personal use and $199.99 for professional use.

Whereas, on the other hand, Ubuntu is completely free to use the software.

Both of the software’s are open-source, which means users can get the source codes of these operating software so that they can understand their working mechanisms.

Like most Linux-based software Ubuntu is safer as compared to Windows.

Whereas, Ubuntu has inbuilt protection as any external software requires a password to make changes in the system, thereby eliminating almost all kinds of malware and antiviruses.

System requirements for the latest version of Windows, i.e., Windows 11 are as follows:

It requires a processor of 1 gigahertz (GHz) or faster with 2 or more cores on a compatible 64-bit processor or System on a Chip (SoC).

It requires the storage of 64 GB or higher if available.

System requirements for the latest version of Ubuntu, i.e., Ubuntu 21.04 are as follows:

25 GB (8.6 GB for minimal) of hard-drive space (or USB stick, memory card, or external drive but see Live CD for an alternative approach)

Either a CD/DVD drive or a USB port for the installer media.

Talking about privacy Ubuntu has an edge over Windows for being centered on privacy. Sensitive data of users is not collected by software belonging to the Linux family. Users also have an option to disable any such features which they believe are posing a threat to their privacy.

On the other hand, Windows is not as much privacy-centered as compared to Ubuntu. Most of the features that can pose a significant threat to the user’s privacy cannot be disabled.

Windows appeals to a greater amount of audience as it is suitable for most of the applications, software, and hardware.

In the case of Windows, for the installation of its latest version, all the drivers of the computers should be updated. The latest versions of Windows are not suitable for drivers installed in an old computer system.

In the case of Ubuntu, there is no need to upgrade them.

Windows also has a higher consumption of resources as compared to Ubuntu.

Windows users depend a lot on hardware like keyboard and mouse for various operations and they can operate in a graphical interface. This makes it very easy for beginners or amateurs to operate it. Hence Windows has a beginner-friendly interface.

In Ubuntu, users can carry out operations using just a keyboard only. Ubuntu has both a graphical interface as well as a command-line operation interface. Users may need some assistance to start operations, hence Ubuntu requires users to be Technically sound.

Windows Operating System is generally preferred by regular users. It is completely suitable for programming. It also supports entertainment purposes, as it supports applications like media players and audio players. It is also suitable for gaming.

Ubuntu operating system, on the other hand, is not meant for gaming and entertainment purposes. It is usually preferred by developers. It is also not very much suitable for programming purposes as it has compatibility issues.

In the case of Windows, users are required to update their drivers and system very frequently. They also receive pop-up messages urging them to update the software again and again. These updates take time and require the system to restart after they are completed.

On the other hand, System updates of the Ubuntu Operating System are really very quick and easy.

Other aspects of Ubuntu vs Windows include

Ubuntu and Windows, both are of the best and one of the most famous operating systems available at the present time in the market. Both have their own pros, cons, features, and functionality. We have undergone deep research on all the comparison criteria and aspects on the basis of which we have drawn a full-fledged comparison.

Now, it is totally dependent on the users, that which Operating system is chosen by them. On the basis of the above explanation, they can know that which of the above-mentioned software full fills their purpose to a higher extent.

And it is very important for one to keep in mind the costs, privacy, safety, system requirements, and their purpose in mind before choosing either of the ones.

Though they are from different software system families, their main function was and is to adhere to their users in the best possible way. All of their updates and changes have gradually made their technical interface better and better.

What interface do windows and ubuntu use?

Windows require all the drivers of the computers to be updated and can not be operated on an old system.

What interface do windows and ubuntu use?

Windows has a GUI ie Graphical User Interface whereas Ubuntu has both GUI and command-line operation interface.

Which of the software is better suited for students?

Windows, as it supports programming, software like Microsoft Office, and gaming, hence it suits more and better to the general public and regular audience.

Which Software is preferred by developers?

Ubuntu is preferred by most developers.

What are the memory requirements for each of the operating systems?

The latest version of Windows requires a RAM of 4 GB, whereas Ubuntu Requires RAM of 2 GB.